In many programming languages like C# and Java the same method can be declared in few variants with the same name and different parameters. This goes by the term “method overloading”. Now let's see how to write these overloaded methods in C#.

In programming methods are identified through the elements of their declaration: name of the method + a list of its parameters. These two elements define its specification, the so called “method signature”.

The method signature is defined by the method name and the definitions of the method parameters (only parameter types are considered, and the parameter names are ignored). Example:

In this example the method's signature is its name (Print), together with its parameter types (string).

If our program holds several methods with the same name, but with different lists of parameters (signatures), we can say that we use method overloading. 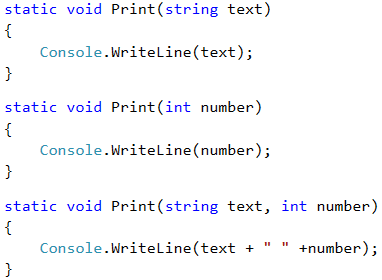 Let's look at the following example: we have two methods with different return types. Despite that, Visual Studio shows that there is a mistake, because both of their signatures are the same. Therefore, when trying to call a method named Print(…), the compiler can't know which of the two methods to invoke.

The input is two values of the same type. The values can be of int, char or string type. Create a method GetMax() that returns as a result the greater of the two values.

We need to create three methods with the same name and different signatures. First we create a method, which will compare integers.

Following the logic of the previous method we create another one with the same name, but this one will compare characters.

Reading the Input Data and Using the Methods

The last step is to read the input data, to use the appropriate variables and to invoke the method GetMax() from the body of the Main() method. 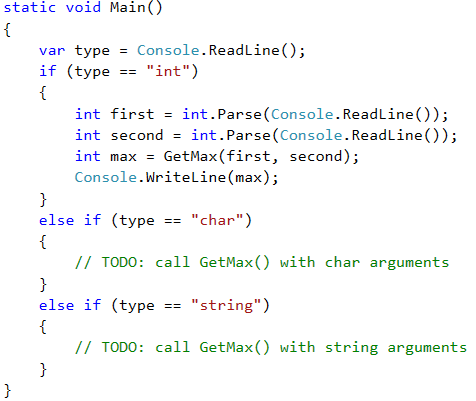