We all know the game called "Bulls and Cows" (https://en.wikipedia.org/wiki/Bulls_and_cows). Upon having a particular 4-digit secret number and a 4-digit suggested number, the following rules are applied:

Upon having a particular secret number and the bulls and cows pertaining to it, our task is to find all possible suggested numbers in ascending order.

If there are no suggested numbers that match the criteria provided from the console, we must print "No".

The input data is read from the console. The input consists of 3 text lines:

The input data will always be valid. There is no need to verify them.

We will solve the problem in a few steps:

We have 3 lines in the input data:

Reading the input data is trivial:

Before starting to write the algorithm for solving our problem, we must declare a flag that indicates whether a solution is found:

If after finishing our algorithm this flag is still false, then we will print No on the console, as specified in the requirements.

Let's start analyzing our problem. What we need to do is analyze all numbers from 1111 to 9999, excluding those that contain zeroes (for example 9011, 3401, etc. are invalid). What is the easiest way to generate all these numbers? We will use nested loops. As we have a 4-digit number, we will have 4 nested loops, as each of them will generate an individual digit in our number for testing.

Thanks to these loops, we have access to every digit of all numbers that we need to check. Our next step is to separate the secret number into digits. This can be achieved very easily using a combination of integer division and modular division.

Only two last steps remain until we start analyzing how many cows and bulls there are in a particular number. Accordingly, the first one is the declaration of counter variables in the nested loops, in order to count the cows and bulls for the current number. The second step is to make copies of the digits of the current number that we will analyze, in order to prevent problems upon working with nested loops, in case we make changes to them.

We are ready to start analyzing the generated numbers.

What logic can we use? The easiest way to check how many cows and bulls there are inside a number is via a sequence of if-else conditions. Yes, this is not the most optimal way, but in order to stick to what is covered in the current book, we will use this approach.

What conditions do we need?

The condition for the bulls is very simple – we check whether the first digit of the generated number matches the same digit in the secret number. We remove the digits that are already checked in order to avoid repetitions of bulls and cows.

We repeat the action for the second, third and fourth digit.

We will apply the following condition for the cows – first we will check whether the first digit of the generated number matches the second one, the third one or the fourth digit of the secret number. An example for the implementation: 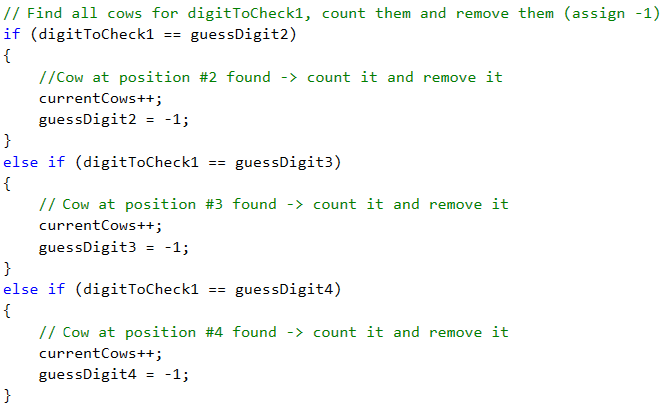