Write a program that enters two integers n and l and generates in alphabetical order all possible "dumb" passwords that consist of the following 5 characters:

The input is read from the console and consists of two integers: n and l within the range [1 … 9], each on a single line.

Print on the console all "dumb" passwords in alphabetical order, separated by space.

We can split the solution of the problem into 3 parts:

For reading of input data we will declare two integer variables int: n and l.

Let's declare and initialize the variables that will store the characters of the password: for the characters of digit type – int – d1, d2, d3, and for the letters – of char type – l1, l2. To make it easier we will skip explicit specification of the type by replacing it with the keyword var.

We need to create five for nested loops, one for each variable. To ensure that the last digit d3 is greater than the first two, we will use the built-in function Math.Max (...). 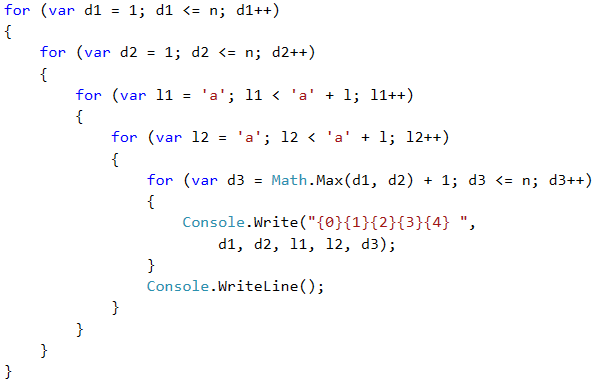 Did you Know That…?