Each variable has a range in which it exists, called variable scope. This range specifies where a variable can be used and how long is its lifetime. In the C# language, the scope in which a variable exists, starts from the line in which we defined it and ends with the first closing curly bracket } (of the method, the if statement, etc.).

Thus, it is important to know that any variable defined inside the body of certain if statement will not be available outside of it, unless we have defined it higher in the code.

Watch the video lesson about the variable scope: https://youtu.be/J54TJBnY5vQ.

In the example below, on the last line we are trying to print the variable salary that is defined in the if statement, we will get an error because we don't have access to it. 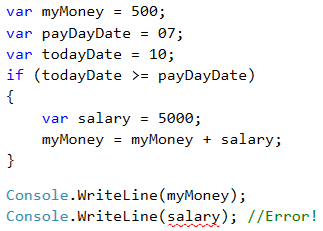 The above code will not compile, because we are trying to access a variable out of its scope.