Bonny is an exceptionally powerful witch. As her natural power is not sufficient to successfully fight vampires and werewolves, she has started to master the power of Expressions. An expression is very hard to master, because the spell relies on the ability to quickly solve mathematical expressions.

is solved in the following way: 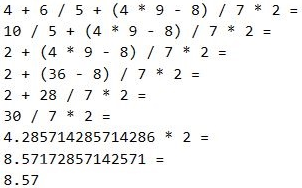 Bonny is very pretty, but not as wise, so she will need our help to master the power of Expressions.

The input data is always valid and always in the described format. No need to validate it.

The output data must be printed on the console. The output consists of one line: the result of the calculated mathematical expression, rounded up to the second digit after the decimal point.

As usual, we will first read and process the input, after that we will solve the problem, and finally, we will print the result, formatted as required.

The input data will consist of exactly one text line read from the console. Here we have two ways to process the input. The first way is by reading the entire line using the Console.ReadLine() command and accessing each symbol (char) of the line via a foreach loop. The second one is by reading the input symbol by symbol using the Console.Read() command and processing each symbol.

We will use the second option to solve the problem.

For the goals of our task we need two variables:

We will clarify two details regarding the aforementioned code. The first one is the use of decimal type for storing the output of our expression in order to avoid any problems with the accuracy pertaining to the float and double type. The second one is the default value of the operator – it is +, so that the very first number can be added to our output.

Now that we already have our starting variables, we must decide what will be the main structure of our program. By the requirements we understand that each expression ends with =, i.e. we must read and process symbols until we reach a =. This is followed by an accurately written while loop.

The next step is the processing of our symbol variable. We have 3 possible cases for it: 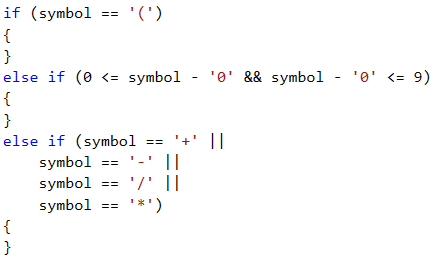 Let's examine the actions that we need to undertake in the relevant cases that we defined:

This is a sample code, implemented the above idea: 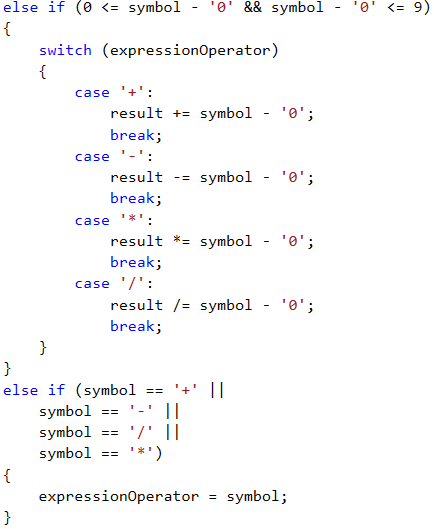 After that, in order to calculate the sub-expression value, we will use the same methods that we used for calculating the main expression – we use a while loop to read symbols (until we reach an ) symbol). Depending on whether the read symbol is a number or an operator, we modify the result of the sub-expression. The implementation of these operations is identical to the above described implementation for calculating expressions. This is why we believe the reader will be able to easily handle it.

After finishing the result calculation for our sub-expression, we modify the result of the whole expression depending on the value of the expressionOperator. 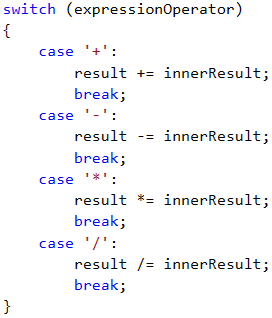 The only output that the program must print on the console is the result of solving the expression with accuracy of up to two symbols after the decimal point. How can we format the output this way? We will leave the answer to this question to the reader.