Before proceeding to the next problem, we will get familiar with the definition of the greatest common divisor (GCD), widely used in mathematics and numbers theory, and will learn how to calculate GCD.

Definition of GCD: the greatest common divisor of two natural numbers a and b is the largest number that divides both a and b without reminder.

Watch the video lesson to learn about the Euclidean algorithm for calculating the GCD of given two integers: https://youtu.be/1-SEOWupvrA.

In the next problem we will use one of the first published algorithms for finding the GCD – Euclid's algorithm.

Until we reach a remainder of 0:

Enter integers a and b and find GCD(a, b).

We will solve the problem through Euclid's algorithm:

This is a sample implementation of the Euclidean algorithm: 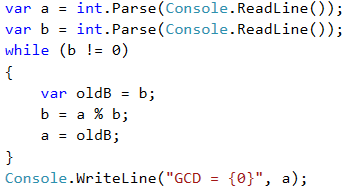