We shall use an infinite loop with break to solve this problem, because we don't know how many times the loop body will be repeated.

We shall check if a particular number n is even, and if it is, we will print it on the screen. An even number is one that can be divided by 2 without remainder. If an invalid number is entered, we will ask the user to enter a number again and will display a notification that the input number is not even.

Here is an idea how we can implement the above described logic:

Here is an example implementation of the idea: 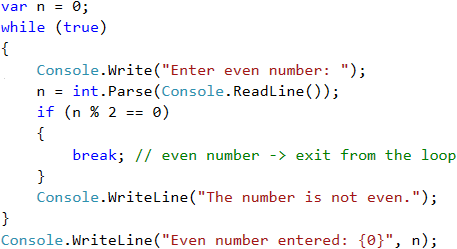 Note: Although the code above is correct, it will not work if the user enters text instead of numbers, such as "Invalid number". Then parsing the text to a number will break and the program will display an error message (exception). How to deal with this problem and how to capture and process exceptions using the try-catch construction will be learned later.