Problem: Point on a Segment

Problem: Point on a Segment

The next sample exam problem is about checking whether given point stays inside or outside given horizontal segment.

Video: Point on a Segment

Watch the video lesson about solving the "Point on a Segment" problem: https://youtu.be/isrSHqLvV90.

The console reads 3 integer numbers (one per line):

Print the result on the console:

We read the input from the console.

Calculate the Minimum Distance to the Closest End of the Segment

The shorter of the two distances we can found using Math.Min(…).

What remains is to find whether the point is on or out of the line. The point will be on the line whenever it matches one of the other two points or its x coordinate lies between them. Otherwise, the point is outside the line. After checking, we display one of the two messages, depending on which condition is satisfied. 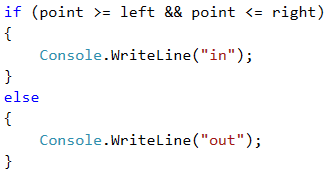