Up until now we found out that when writing the code of a program that solves a problem, it is easier to divide the task into parts. Each part fulfills a given action and this way it is not only easier to solve the task, but the readability of the code and checking for mistakes is significantly better.

Each piece of code that executes some functionality and has been separated logically can take the functionality of the method. This is exactly what methods are – pieces of code with names given by us in a certain way, which can be called as many times as we need them.

A method can be called as many times, as we think we need, in order to solve a problem. This saves us repeating the same code over and over again, and also reduces the possibility to make a mistake when correcting the code.

Simple methods are used for performing a certain action that helps to solve a given problem. These actions can be printing a string on the console, doing a verification, executing a loop, etc.

Let's see the following example of a simple method:

This method prints a header, which is a sequence of the - symbol. Because of this, its name is PrintHeader. The parentheses ( and ) always follow the name, no matter what the method is called. We will later see how to name the methods we work with, but for now, we will only say that it is important for its name to describe the action that the method is doing.

The body of the method contains the program code, which is between the curly brackets { and }. These brackets always follow its declaration and between them we write the code, which solves the problem described by the method's name.

To call this method, we just write its name, along with () like it is shown below:

A method should be called from a code inside another method, e.g. from the Main() method of the C# program:

So far we determined that methods help with dividing larger programs into smaller parts, which leads to easier solving of the problem in question. This makes our program not only better structured and easier to read, but more understandable as well.

By using methods, we avoid repeating code. Repetition is bad practice, because it complicates maintaining the program and leads to errors. If a certain part of our code can be found more than once in the program and we need to change it, the changes must be made in all of the repetitions of the code in question. There is a great probability to miss a spot where correction is needed, which would lead to incorrect behavior of the program. This is the reason why it is a good practice to use a certain fragment of code more than once in our program, to define it as a separate method.

Methods make it possible to use certain code multiple times. With solving more and more problems, you will find that using already existing methods saves a lot of time and effort.

In C# you can declare methods inside a class, i.e. between the opening { and closing } brackets of the class. Declaring is registering the method in the program, so that it can be recognized in the rest of it. The best-known example is the Main(…) method, which we use in every program that we write.

With the next example we will look at the mandatory elements in the declaration of a method.

When declaring methods, you must follow the sequence of its base elements – first type of the returned value, then method name and in the end list of parameters, surrounded by parentheses ().

After we have declared a method, its implementation (body) follows. In the body of the method we write down the algorithm, by which it solves a problem, i.e. the body contains the code (program block), which applies the method's logic. In the shown example we are calculating the area of a square, which is num * num.

Calling a method means starting to execute the code, which is in the body of the method. This happens by writing its name, followed by parentheses () and the semicolon sign ; to end the line. If the method needs input data, it is given in the parentheses (), and the succession of the parameters should be the same as the one of the given parameters when declaring the method. Here is an example: 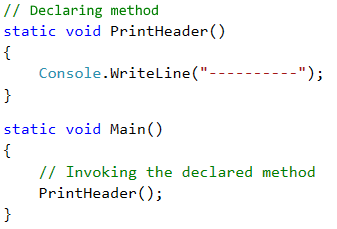 A method can be called from several places in the program. One way is to call it in the main method.

A method can also be called from the body of another method, which is not the main method of the program.

There is also a possibility for the method to be called in its own body. This is called recursion and you can find more information about it in Wikipedia or you can search on your own in the Internet.

It is important to know that if a method is declared in a class, it can be called before the line, on which it has been declared.

Write a method that prints a blank receipt. The method should call another three methods: one to print the header, one for the middle part of the receipt and one for the lower part.

The first step is to create a void method to print the upper part of the receipt (header). Let's give it a meaningful name, which describes what the method does, e.g. PrintReceiptHeader. In its body write the code from the example below:

After this we will create another method, which will call the three methods we already wrote, one after the other:

In the end we'll call the PrintReceipt method from the body of the Main method of our program:

The program with five methods that are invoked from one another is ready and we can run and test it, after which we can send it for testing in the judge system: https://judge.softuni.org/Contests/Practice/Index/594#0.