On the first line of the input there is an integer n (1 ≤ n ≤ 1000) that represents the count of lines of numbers that will be passed. On each of the following n lines we have one integer within range of [1 … 1000] – numbers, on which we have to calculate the histogram.

We can split the program that solves this problem into three parts:

Before we proceed, we will make a small deviation from the current topic, namely, we will briefly mention that in programming every variable has a certain data type. In this problem we will use the numeral types int for integers and double for real numbers. Often, to make it easier, programmers miss the explicit specification of the type by replacing it with the keyword var. For better understanding we will write the type upon declaring the variables.

We will now proceed with the implementation of each of the above points.

Before we proceed to reading the input data, we must declare the variables, in which we will store it. This means choosing the right data type and appropriate names. 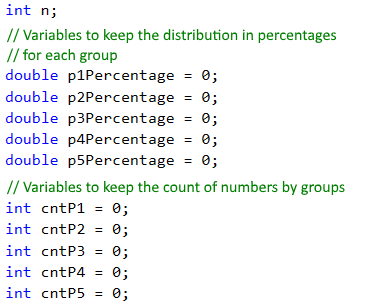 In the variable n we will store the count of numbers that we will read from the console. We choose int type, because n is an integer within the range from 1 to 1000. For the variables in which we will store the percentages, we choose double type, because they are not expected to always be integers. Additionally, we declare the variables cntP1, cntP2 etc., in which we will keep the count of the numbers from the respective group, and we choose again int type.

After we have declared the needed variables, we can read the number n from the console: 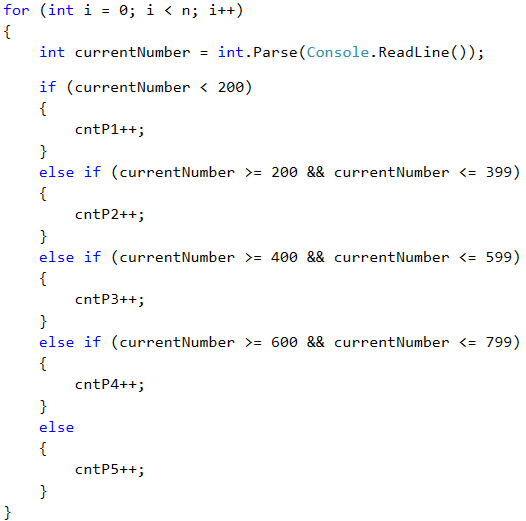 After we have determined how many numbers there are in each group, we can move on to calculating the percentages, which is the main purpose of the problem. For this we will use the following formula:

This formula in the program code looks like this:

If we divide by 100 (int number type) instead of 100.0 (double number type), we will perform the so-called integer division and the variable will save only the whole part of the division, and this is not the result we want. For example: 5 / 2 = 2, but 5 / 2.0 = 2.5. Considering this, the formula for the first variable will look like this:

To make it even clearer, let's take a look at the following example:

After reading the numbers in group p1 we have 2 numbers, and in p5 we have 1 number. We have no numbers in the other groups. By applying the above formula, we calculate the percentages of each group. If we multiply in the formula by 100, instead of 100.0 we will obtain for group p1 66%, and for group p5 – 33% (without fractional part).

We only have to print the results output. The description says that the percentages must be with precision of two points after the decimal point. To achieve this, write :f2 after the placeholder: