It is strange, but most people start planning their vacations well in advance. A young programmer from Bulgaria has certain budget and spare time in a particular season.

Write a program that accepts as input the budget (in BGN – Bulgarian levs) and season, and as output displays programmer's vacation place and the amount of money they will spend.

The budget determines the destination, and the season determines what amount of the budget will be spent. If the season is summer, the programmer will go camping, if it is winter – they will stay in a hotel. If it is in Europe, regardless of the season, the programmer will stay in a hotel. Each camp or hotel, according to the destination, has its own price, which corresponds to a particular percentage of the budget:

The input data will be read from the console and will consist of two lines:

Two lines must be printed on the console.

Typically, as for the other tasks, we can separate the solution into the following parts: reading the input data, doing calculations, printing the result.

While reading carefully the requirements, we understand that we expect two lines of input data. The first parameter is a real number, for which we need to pick an appropriate variable type. For higher level of calculation accuracy, we can pick decimal as a variable for the budget and – string for the season.

Example: When you need to do money calculations in a task, use decimal for higher level of accuracy.

Let's create and initialize the variables needed for applying the logic and calculations.

Similarly to the example in the previous task, we can initialize variables with some of the output results, in order to spare additional initialization.

When examining once again the problem requirements, we notice that the main distribution of where the vacation will take place is determined by the value of the budget, i.e. our main logic is divided into two cases:

Based on the way we arrange the logical scheme (the order in which we will check the border values), we will have more or less conditions in the solution. Why?

After that, we need to apply a condition to check the value of the season. Based on it, we will determine what percentage of the budget will be spent, as well as where the programmer will stay – in a hotel or a camp.

This is a sample code that may be used to implement the above idea: 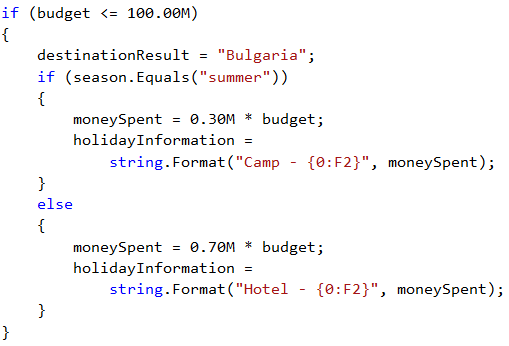 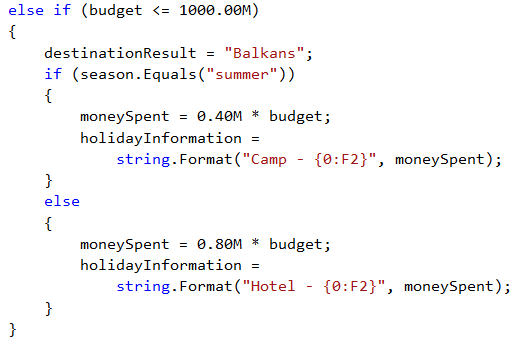 We can optimize the conditions checking by assigning a default value and then checking one variant less. This saves one logical step.

For example, this block: 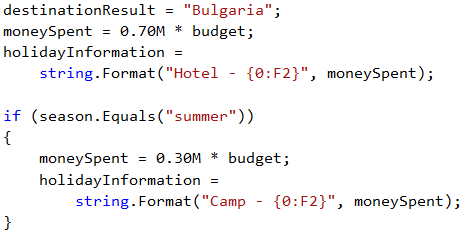 What remains is to display the calculated result on the console: