Problem: On Time for the Exam

Problem: On Time for the Exam

Write a program that inputs the exam starting time and the time of student's arrival, and prints if the student has arrived on time, if they have arrived early or if they are late, as well as how many hours or minutes the student is early or late.

Read the following four integers (one on each line) from the console:

Print the following on the first line on the console:

If the student arrives with more than one minute difference compared to the exam starting time, print on the next line:

According to the assignment, we expect four lines containing different integers to be passed. Examining the provided parameters, we can use the int type, as it is suitable for the expected values. We simultaneously read the input data and parse the string value to the selected data type for integer.

Examining the expected output, we can create variables that contain the different output data types, in order to avoid using the so called "magic strings" in the code.

After reading the input data, we can now start writing the logic for calculating the result. Let's first calculate the start time of the exam in minutes for easier and more accurate comparison.

What remains is to calculate the difference between the two times, in order to determine when and what time compared to the exam time the student arrived at.

Checking If the Student Arrived on Time or They Were Late

Our next step is to do the required checks and calculations, and finally we will print the output. Let's separate the code into two parts:

In order to spare one additional check (else), we can, by default, assume that the student was late.

After that, according to the condition, we will check whether the difference in times is more than 30 minutes. If this is true, we assume that the student is early. If we do not match the first condition, we need to check if the difference is less than or equal to zero (<= 0), by which we are checking the condition whether the student arrived within the range of 0 to 30 minutes before the exam.

In all other cases we assume that the student was late, which we set as default, and no additional check is needed. 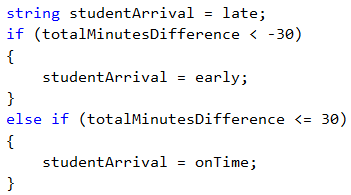 Finally, we need to understand and print what is the time difference between exam start time and student arrival time, as well as whether this time difference indicates time of arrival before or after the exam start.

We also need to do one more check – whether the time of student's arrival is before or after the exam start time. 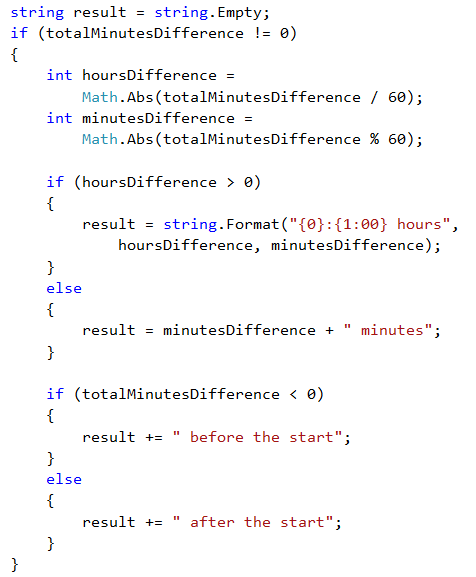 Finally, what remains is to print the result on the console. According to the requirements, if the student arrived right on time (not even a minute difference), we do not need to print a second result. This is why we apply the following condition:

Actually, for the purposes of the task, printing the result on the console can be done on a much earlier stage – during the calculations. This, however, is not a very good practice. Why?

Let's examine the idea that our code is not 10 lines, but 100 or 1000! One day, printing the result will not be done on the console, but will be written in a file or displayed as a web application. Then, how many places in the code you will make changes at, due to such a correction? Are you sure you won't miss some places?