The last thing we will get familiar with in this chapter is how to "capture" wrong data using the try-catch construction.

Watch this video lesson to learn how to use the try-catch statement to enter a valid integer number in certain range: https://youtu.be/0WLRjNcSh3I.

The try-catch construction is used to intercept and handle exceptions (errors) during the program execution.

In programming, exceptions are a notification of an event that violates the normal operation of a program. Such exceptional events interrupt the execution of the program, and it is looking for something to process the situation. If it does not find it, the exception is printed on the console. If found, the exception is processed, and the program continues its normal execution. After a while, we'll see how this happens.

When an exception is found (e.g. when we divide an integer by zero), it is said that the exception was "thrown" (throw exception).

When the exception is handled and a piece of program logic recovers the program execution from the problem, we say the we "catch the exception".

The try-catch construction in C# has different forms, but for now we will use the most basic of them: 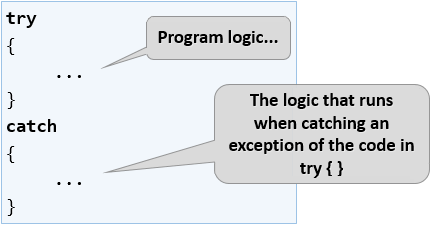 In the next task, we will see how to handle a situation where a user enters a non-numeric input (for example, a string instead of an int) by try-catch.

Write a program that checks if an n number is even, and if it is, prints it on the screen. If an invalid number is entered, the program should display a notification that the entered input is not a valid number and the entering of the number has to be done again.

Here's how we can solve the problem:

Here is a sample implementation of the described idea: 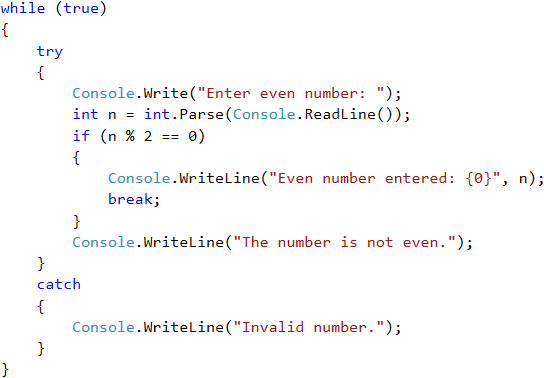 Play with the above code. Try to enter invalid numbers (e.g. text messages), non-integer numbers, odd numbers and even numbers.

The solution should work in all cases: whether we are entering integer numbers, invalid numbers (for example, too many digits), or non-numbered text.

The above program logic will repeat in an infinite loop the process of entering a value until a valid even integer is entered.