A nested loop is a construction where in the body of one loop (outer one) stays another loop (inner one). In each iteration of the outer loop, the whole inner loop is executed. This happens in the following way:

Watch this video to learn the concepts of nested loops: https://youtu.be/Sj49u6XlzXU.

Here is an example that illustrates nested loops. The aim is again to print a rectangle made of n * n stars, in which for each row a loop iterates from 1 to n, and for each column a nested loop is executed from 1 to *n:

If we enter 5 as input on the console, the above sample code will print the following output: 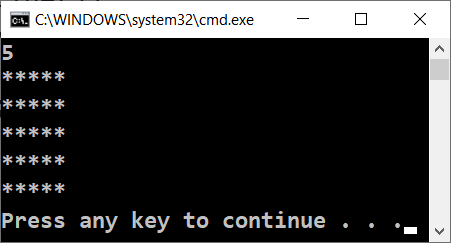 Let's look at the example above. After initializing the first (outer) loop, its body, which contains the second (nested) loop starts executing. By itself it prints on one row n number of stars. After the inner loop finishes executing at the first iteration of the outer one, the first loop will continue, i.e. it will print an empty row on the console. After that, the variable of the first loop will be renewed and the whole second loop will be executed again. The inner loop will execute as many times as the body of the outer loop executes, in this case n times.