Print the numbers 1 … n in a table as in the examples below.

Watch this video lesson to learn how to print a table of numbers like the shown above using nested loops: https://youtu.be/DVf7riptCwA.

We can solve the problem using two nested loops and little calculations inside them:

Implementation of the Idea

Here is a sample implementation of the described idea: 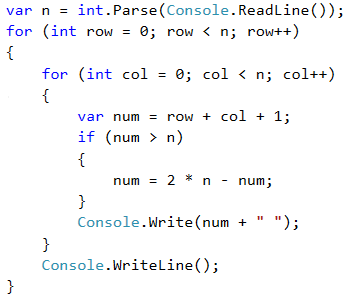